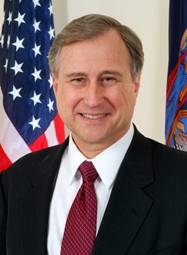 Ed Cox is a lawyer with a distinguished record of service to his Party and in the domestic and international policy arenas.  He has served three U.S. Presidents, four Governors and the Republican Party at the state and national levels.  He was sworn in as Chairman of the Republican Party of New York State on September 29, 2009.

For more than forty years he has supported and campaigned for candidates across the country beginning in 1968 as a part of the Nixon presidential campaign. In 1972, he travelled extensively as a family surrogate for President Nixon and in 1980 was active in the Reagan campaign. In 1984, he conceived and organized the statewide volunteer effort which helped carry New York State for the Reagan‑Bush team. In 1988 and 1992, Cox organized the New York speakers’ bureau for George H.W. Bush’s presidential campaigns.

Cox has assisted candidates at all levels throughout New York in numerous election cycles.  And in the critical election of 1994, Cox played a key role in helping to elect George Pataki Governor. He also participated in the Republican National Conventions and presidential campaigns of 1996, 2000, 2004. During the 2008 Presidential election, he served as State Chairman of John McCain’s campaign.

Under President Reagan, Cox served as General Counsel to the government corporation which financed major synthetic fuels projects. As a Trustee of the State University of New York (SUNY) he has developed cutting-edge policies and programs for community colleges, charter schools, teacher training, facilities construction and finance and administration. Cox has played a key role under four Governors in the selection of judges for New York's highest court.  In volunteer positions both in and out of government he has been a leader on energy and environmental policies.

His writings on public policy have appeared in The New Republic magazine, the Antitrust Law Journal and the New York Post, and he is co‑author of a book on the Federal Trade Commission.

Cox was born in Suffolk County, Long Island and was raised in Yorkville, New York City, where he graduated from Trinity High School. He received his B.A. degree in 1968 from Princeton University’s Woodrow Wilson School of Public and International Affairs. He earned his J.D. degree from Harvard Law School in 1972.

He is a proud veteran having joined the Reserve Officers Training Corp (ROTC) at Princeton in 1964.  He later completed officer and airborne training at Fort Benning, Georgia and served as a reserve officer with the 11th Special Forces Group.

Cox practices corporate and finance law and has served as a member of the Management Committee and the Chairman of the Corporate Department at Patterson Belknap Webb & Tyler LLP.  He has represented companies in a wide variety of industries including software, finance, insurance and biotech and has been named to the list of Super Lawyers in the practice of Securities and Finance law.

Cox married Patricia Nixon in the Rose Garden of the White House in 1971. They have one child, Christopher, who is a graduate of Princeton and the New York University School of Law.