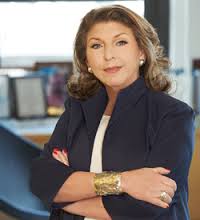 Daisy Expósito-Ulla is a pioneer and a recognized authority in Multicultural Marketing and brand communications. She is Chairman/CEO of d exposito & Partners. In 2015, the agency was chosen AEF Agency of the Year by the Advertising Educational Foundation which also recognized Daisy “for her contributions to American advertising.”

Prior to founding the agency, she was Chairman/CEO of Young & Rubicam/WPP’s The Bravo Group, a company she helped launch and subsequently build during her twenty-four-year tenure, becoming the largest U.S. Hispanic agency of all time. As a visionary creative leader and partner to many respected companies, she has achieved a transformational career in cross-cultural brand-building, working with clients such as AT&T, KRAFT Foods, Bank of America, Pfizer, Sears, Unilever and others.

Among her many honors: The New York Women in Communication’s Matrix Award; AAF’s Role Model; New York Women’s Agenda Star; The Carnegie Foundation; The Carvel Immigrant Award; and New York’s International Center recognition which she shares with Nobel laureate Elie Weisel and former Secretary of State Henry Kissinger. Presenting Daisy with the award, Ambassador Ed Ney, Chairman emeritus, Y&R, described her as “the most important Madison Avenue success story written by a woman not born in the United States.

Besides having received numerous industry and creative awards (Clio, Effie, Addy, etc.), she has consistently appeared as one of the Most Influential Latinos in the U.S.A. Her participation on boards includes the Ad Council, the AEF, and the 4A’s Foundation. She was a founding member and President of the Association of Hispanic Advertising Agencies (AHAA). She was appointed by former Mayor Bloomberg to serve as City Commissioner on New York’s Arts and Entertainment Commission.

Daisy came to this country from Cuba with her parents and sister in 1963. She, her husband (filmmaker Jorge Ulla, who is also her partner and agency co-founder), and their son Gabriel, a writer with a B.A. from NYU, working on his M.F.A. from Columbia University, live in New York City.”