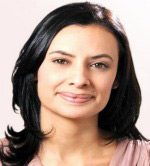 
Maria Teresa Kumar, founding executive director of Voto Latino, is a dynamic leader and advocate who has dedicated her career to empowering Latino youth and engaging them in the political process. Her strong record of accomplishments has earned her high profile and recognitions, including being named as one of the 20 most notable Latinos under 40 by PODER magazine, and numerous leadership awards including an Emmy nomination, the White House Project, Imagen Foundation and the New York legislature. In addition to being a frequent commentator on MSNBC, Maria Teresa serves asa an occasional blogger for national outlets. At Voto Latino, Maria Teresa has guided the organization's growth through the use of creative campaigns that incorporate the latest online and mobile technology, celebrity voices and youth to create positive change. Maria Teresa started her masters degree in public policy from Harvard's Kennedy School of Government and a bachelors in international relations from the University of California at Davis.