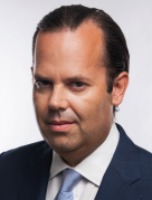 Nicholas Prouty is the founder and CEO of Putnam Bridge, a firm engaged in the acquisitions and management of distressed landmark properties in the United States and abroad. Mr. Prouty has been a real estate principal in several companies, including a General Partner of Hudson Cross Financial, a company engaged in the acquisition and disposition of foreclosed houses on a nationwide basis. In addition, he has served as an advisor to many specialty real estate companies.
Within the last year, Mr. Prouty's firm has been active in Puerto Rico and has made two significant nine figure investments. Those investments include the acquisition of Ciudadela, a mixed use real estate development in Santurce and Puerto del Rey, the largest marina in Puerto Rico.
Mr. Prouty formerly headed acquisitions and restructuring for a $1+billion hedge fund focused on asset based lending and real estate finance. Prior experience also included serving as Managing Partner to a prominent family office, and as treasury analyst at Lazard Freres & Co.
Mr. Prouty is the founder of the Habitat Support Foundation, a non-profit entity based in Washington, D.C. engaged in providing non-recourse loan guarantees to Habitat for Humanity. Mr. Prouty received a Bachelors of Arts in European History from the Claremont Colleges in Claremont, California. He is married, has two children and lives in San Juan, Puerto Rico.