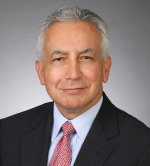 
Roel Campos is the Firm's National Chair of Securities Regulation and Enforcement.
Mr. Campos' practice consists of advising and defending corporate management teams and boards of directors with respect to enforcement, internal investigations, prosecution, securities and international regulation, and corporate governance. Mr. Campos is a highly sought after orator and regularly serves as lead speaker for prestigious legal and business conferences around the globe.
Mr. Campos was recently named to President Barack Obama's Presidential Intelligence Advisory Board, and he was a Commissioner of the Securities and Exchange Commission. He was sworn in as a Commission of the SEC on August 22, 2002. On June 2, 2005, he was nominated by President George W. Bush for a second term, and was confirmed by the United States Senate on July 29, 2005.
Mr. Campos served for four years as the Commission's liaison to the international regulatory community. During his time at the SEC, Commissioner Campos became one of the best known regulators in the world.
As Vice Chair of the Technical Committee of the International Organization of Securities Commissioners, he developed productive relationships with securities regulators in Europe, Asia, Australia, and Latin America. Mr. Campos also facilitated the development of international auditing and accounting standards through his work as Chair of the Monitoring Group, which oversees the setting of International Standards of Audit.
Mr. Campos has presided over hundreds of complex enforcement cases, applying the Securities Act of 1933, the Securities Exchange Act of 1934, the Investment Company Act of 1940, and the Investment Advisers Act of 1940. He also has extensively participated in the crafting and adoption of many of the SEC's recent major regulatory initiatives, including: the Sarbanes-Oxley Act, corporate governance, director liability, corporate penalties, international accounting and auditing standards, Securities Act reform, SRO and market reform, retirement investment protection, research analyst conflicts, and the internationalization of the securities markets.
Prior to being nominated to the Commission, Mr. Campos was one of two principal owner-executives of El Dorado Communications, a radio broadcasting company, at its headquarters in Houston. However, he began his career as an officer in the U.S. Airfare. After attending Harvard Law School, he worked in Los Angeles for major law firms as a corporate transaction/securities lawyer and litigator. Beginning in 1985, Mr. Campos served as a federal prosecutor for five years in the U.S. Attorney's Office in Los Angeles. He prosecuted complex and violent narcotics cartels and, in a celebrated trial, convicted defendants for the kidnapping and murder of a DEA Agent. He also investigated and prosecuted major government contractors for fraudulent conduct. He then returned to private law practice for several years before co-founding El Dorado Communiations, Inc.
Mr. Campos is a founding member of the New America Alliance, a Latino initiative for raising awareness of investment opportunities in the Latino sector in the United States.