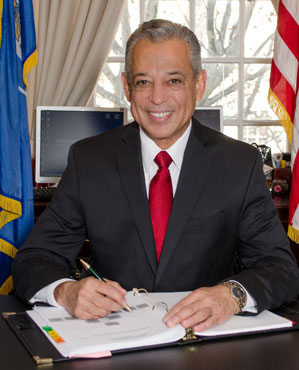 Pedro E. Segarra is the 66th Mayor of the City of Hartford. He was first sworn in on June 25, 2010 and then in November of 2011, he won a sweeping victory with 81% of the vote. Elected with a clear mandate of bringing stability to Hartford, Mayor Segarra created a sense of urgency to revitalize Connecticut’s Capital City. His signature program “Opportunities Hartford” focuses on improvement in three pillars; income, education and employment. During his tenure, Mayor Segarra has stabilized the mill rate, maintained the City’s bond rate, and increased the Rainy Day fund to the highest among Connecticut’s major cities. The Segarra administration has added a record number of market, moderate and affordable housing units in the City.

Having lost his father at a young age to gun violence, Mayor Segarra has earned a reputation for being unwavering in his determination to reduce violent crimes. Under his leadership, record breaking decreases in shootings have been achieved, and the City of Hartford was recognized as being safer now than in the past 25 years. He appointed a new Chief of Police and spearheaded the modernization and effectiveness of policing through the use of intelligence gathering, new technology and training.

Having called Hartford his home since the age of 16, Mayor Segarra is dedicated to creating a 21st Century renaissance city. He has committed over $10 million to restoring the Capital City Parks System. He secured $10 million in funding for the Intermodal Triangle Project – a sustainable transportation construction project to improve transit, pedestrian and biking infrastructure in Downtown Hartford bringing an estimated 275 jobs and generating $2 million dollars of new economic activity. Mayor Segarra is leading efforts to have Colt Gateway designated a National Park, which could bring 1,000 new jobs and inject $150 million back into the local economy. Other notable achievements include; facilitating the UCONN West Hartford Campus relocation to Downtown Harford, driving the implementation of Rapid Transit, a $600 million federal and state transportation project and securing a $1million grant from the U.S. Economic Development Administration to establish an Innovation Hub for Hartford entrepreneurs- one of 3 cities selected in the country.

A product of public schools, he understands the importance of a high quality education and equal opportunities for all Hartford students. A believer in the benefits of early childhood learning, the Mayor has been one of the City’s strongest advocates for education reform effort, launched in 2007. Under his leadership, over $250 million has been invested to build and renovate Hartford public schools. A committed supporter of the Hartford Public Library, in 2012 he pushed the first funding increase in recent memory and secured the bonding resulting in the opening of two new branches.

Determined to improve the quality of life for residents, Mayor Segarra added a Cultural Affairs Department, a first for City Hall, instituting popular events like Jazz and Movies in historic Bushnell Park, the creation of the Capital City Parks System and the Quality of Life unit at the Hartford Police Department.

After graduating from the former Hartford Community College (now Capital Community College), Mayor Segarra earned a full scholarship to the University of Hartford where he earned his BA in Political Science. He then went on to attend the University of Connecticut Schools of Social Work and Law. There, he founded the Latino Law School Organization and served as its first President. A practicing attorney for over 27 years, he was the youngest person to serve as Corporation Council when he was appointed in 1991; is a founding partner of the Hispanic Health Council and CLARO. He was elected City Council President in January of 2010 and became Mayor June of the same year. Mayor Segarra lives with his husband Charlie Ortiz in the West End and their Labrador mix "Betzaida".