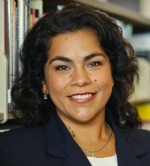 Rebecca J. Viagran was elected to City Council District 3 in May 2013 and re-elected to the office in 2015.

SAN ANTONIO HERITAGE
Councilwoman Viagran is proud to be from a family whose history extends over 200 years in San Antonio and South Texas, and has a long legacy of service to the community she currently serves. She resides in the same neighborhood where she grew up while attending St. Leo's Catholic School and Providence High School. After high school, Councilwoman Viagran attended Texas State University where she received a Bachelor of Science Degree in Geography – Urban and Regional Planning. Desiring to make an impact in San Antonio city government, she returned to her hometown after graduating from college to work as a city council aide. Her focus was working with neighborhood associations and constituent services. She takes pride in serving the constituency that helped nurture, form, and educate her.

DIVERSE EXPERIENCE
Aside from being directly involved with city government, Councilwoman Viagran also has experience working with community organizations and volunteering for important causes. She served the San Antonio Hispanic Chamber of Commerce as Vice President of External Affairs and worked as the Director of Government and Community Relations for Mexicans and Americans Thinking Together (MATT).

Volunteerism has played a central role in Councilwoman Viagran's career path. Affected by the events of September 11, she volunteered in New York City at Ground Zero. She also worked as an international missionary in Spain. Leadership development and issues concerning women and children have always been important to Councilwoman Viagran. She has served on the board of directors of Voices for Children-San Antonio and was appointed to the Mayor's Commission on the Status of Women.

Councilwoman Viagran earned a Masters Degree in Public Administration from St. Marys University and taught as an adjunct professor in Political Science. She also assisted in maintaining her familys small business, established by her parents in 1986 in District 3.

LEADERSHIP ON COUNCIL
Councilwoman Viagran serves as Chair of the Councils Criminal Justice, Public Safety, and Services Committee, and she currently sits on the following council committees:

BUILDING LEADERSHIP
In 2013, Councilwoman Viagran identified a need to foster and nurture the future leaders of District 3. During her first term in office, she implemented the first-ever student leadership program known as the District 3 Legacy Leadership Initiative (D3LLI) for high school and college level students. The mission of the program is to introduce the future generation of young leaders in District 3 to a network of community leaders in order to cultivate education, knowledge, and exposure towards civic engagement. To date over, 30 leaders have graduated from the D3LLI program.

WORLD HERITAGE LIAISON
Councilwoman Viagran was tireless in her work towards promoting and working towards the UNESCO World Heritage Designation.

DISTRICT VISION
Councilwoman Viagran continues to work towards providing opportunities for prosperity, public safety, and progress for the residents of District 3. Because of her strong roots to this community, it is her vision to enrich the district with more places to live, work, play, learn and thrive.

When out in the district, Councilwoman Viagran enjoys spending time on the Mission Reach with her dogs and speaking to young people and womens groups on leadership. She also enjoys visiting with seniors at the various Senior Centers.

Her work continues to bring attention to the belief that District 3 represents the past, present and future of San Antonio.