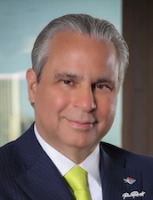 Alberto Baco Bague is an attorney, CPA, and entrepreneur with over 40 years of experience. He graduated Magna Cum Laude with a Bachelor's Degree in Business Administration from the University of Puerto Rico in 1979 and received a juris doctor in 1984. He obtained his CPA license in 1981 and became an attorney in 1985, scoring in the top 1% in both bar exams. He began his professional career in 1979, holding several positions with law firms, international accounting firms, and government agencies. In 1989, he was appointed Executive Vice President of the Government Development Bank of Puerto Rico, where he stayed for a year before assuming the role of President of the Economic Development Ban between 1990 and 1993. After public service, he established his own independent practice, providing advisory services in the areas of mergers and acquisitions, capital raising restructuring, and government affairs. From 1998 to 2011, he worked as President and Chief Executive Officer of Marvel International and Bohio International, a diversified food manufacturer, marketer and distributor of branded products.
During his career, Baco Bague has been an active supporter of the development of the venture capital industry in Puerto Rico and was a co-investor of various projects. He serves or has served on the Board of Directors of several companies including W Holding and Westernbank (2009-2010), Economic Development Bank (2001-2009) and PRASC Holding Corp. (2009 to present). He is also a member of the Board and Chairman of the Young Presidents Organization, Chapter of Puerto Rico. Recently Baco Bafue had a calling to return to public service and use his knowledge and experience to promote the economic development of Puerto Rico, so he accepted to be part of Governor Alejandro Garcia Padilla's economic team as Secretary of the Department of Economic Development and Commerce. Alberto Baco Bague is the son of working parents, has been married for 26 years, and is the father of three children.