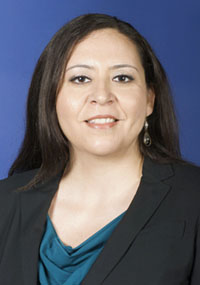 Alejandra Ceja was appointed by the White House on May 6, 2013, to serve the president and secretary of education as the executive director of the White House Initiative on Educational Excellence for Hispanics.

As America’s largest and fastest-growing minority group, Latinos represent more than 11 million students in U.S. public schools, constituting more than 22 percent of all pre-K–12 students. Ceja will work closely with the Latino community and the President’s Advisory Commission on Educational Excellence for Hispanics to implement the goals and deliverables under Executive Order 13555, by which President Barack Obama renewed the initiative, and better align the work of the initiative with the Department’s cradle-to-career agenda.

For the three-and-one-half years prior to assuming this position, Ceja served as the chief of staff to Under Secretary of Education Martha Kanter. In that role, Ceja was instrumental in managing the under secretary’s personnel, budget and associated operations, including the operations of six White House initiatives, to support the president’s 2020 goal, what Secretary of Education Duncan calls the nation’s “North Star”: The United States will attain the highest proportion of college graduates in the world by 2020.

Prior to joining the Department, Ceja served as the senior budget and appropriations advisor for the House Committee on Education and Labor, chaired by Congressman George Miller. There, she drafted legislation in support of national service reauthorization—the Edward M. Kennedy Serve America Act—and worked on policy issues related to child nutrition, English language learners, migrants, Impact Aid and appropriations. From 1999 to 2007, Ceja was a program examiner for the White House Office of Management and Budget, where she helped formulate the federal budget for the Department of Labor and the Corporation for National and Community Service. Ceja has also worked for the Indianapolis Private Industry Council and with Congresswoman Lucille Roybal-Allard in her Washington, D.C., office.

A native of Huntington Park, Calif., Ceja holds a bachelor’s degree in political science from Mount St. Mary’s College in Los Angeles, and a master’s degree in public administration from Baruch College at the City University of New York. She is a graduate of the Congressional Hispanic Caucus Institute’s Public Policy Fellowship, the Presidential Management Fellows program, the National Hispana Leadership Institute and the National Urban Fellows program.