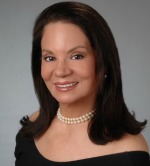 NAA Institute Chair of the Board
Managing Partner, Victoriana, LLC

She is a motivational speaker and coach to Latinos through her weekly radio show on Univision Radio/South Florida, El Arte del Triunfo/The Art of Success and through a live seminar series based on program.

Fernandez-Haar began her professional career as the first woman in Flagship Banks’ executive training program, where she later headed the credit department and served as Assistant Vice President of Corporate Lending – National Accounts. She was Vice President of Commercial Lending at Jefferson National Bank when she retired from financial services to pursue entrepreneurial opportunities in the Hispanic marketing space.

A recognized expert in multicultural marketing, Fernández-Haar founded The IAC Group in 1978 to provide marketing, branding, advertising and public relations services to a client roster that grew to include some of the most respected regional, national and multinational companies. She served as the firm’s Chairman and CEO through its sale in October 2004. Concurrent with her work at IAC, she created, wrote and/or produced programs for English and Spanish language television: Nuestras Raices Hispanas/Our Hispanic Roots aired by Univision and PBS affiliates; Comercio Sin Fronteras (Commerce Without Borders), CBS Telenoticias’ first pan-regional weekly international business program; and WPBT (PBS) English-language series Viva focusing on Hispanic achievements, programs in which she also starred.

Ms. Fernández-Haar has chaired or presided a number of service organizations, among them
the Association of Hispanic Advertising Agencies, New America Alliance, Hispanic Heritage Council and World Trade Center Miami, breaking new ground and scoring significant firsts at each. She was the Hispanic speaker at the First White House Conference on the Equal Rights Amendment and provided congressional testimony- representing the NAA - advocating for greater participation in financial services and access to capital for American Latinos.

In addition to advertising-related recognitions, in 1992 Fernández-Haar was named Inc. Magazine’s Minority Entrepreneur of the Year for Florida. Subsequently, she received the Circle of Excellence Award of the Hispanic Business Roundtable, the American Red Cross Spectrum Award for Entrepreneurship, and a Brillante Award from the National Association of Hispanic MBAs.

As the Founding Principal and Managing Partner of Victoriana, LLC, a timber and agri-tourism enterprise located in North-Central Florida, she is in the process of developing a 600-acre nature retreat, scheduled for completion in the Spring of 2013.