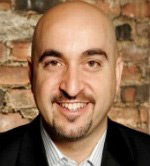 Andy Unanue is the CEO of AUA and is involved in all aspects of the business including investment management, contract negotiations and provides consulting services to various business partners. Prior to founding the firm, Andy held various positions with Goya Foods, Inc. between 1991-2005. Andy was Goya's Chief Operating Officer(2000-2005) managing the daily operations of Goya's U.S. business. Andy was involved in strategic planning, new product development, advertising, media, and community relations. One of his greatest successes included expanding Goya's recognition from primarily Hispanic households to becoming a household name in all households throughout the United States.
In 2011, Restaurant Business named Andy "Entrepreneur of the Month" and northjersey.com & The Record newspaper named him one of the country's "2011: People to Watch"
Andy serves on the boards of KABR Real Estate Partners, Opt-Intelligence, Inc., TRUFOODS, LLC, 13th Street Entertainment, LLC, and eSchoolData, Inc. Additionally he serves on the boards of several not-for-profit organizations including Ballet Hispanic, The C&J Unanua Foundation and is a member of the University of Miami's President Council. Past directorships include the U.S. Savings Bonds National Volunteer Committee as Food and Beverage Chair, and was Co-Chair of the Annual Conventions of the U.S. Hispanic Chamber of Commerce held in Los Angeles.
Andy is a recipient of the Hispanic MBA's prestigious Entrepreneurship Achievement Award, and the Tonio Burgos Business Award. Both the Federation of Hispanic Chambers and Hispanic Magazine honored him as Businessman of the Year. The American Advertising Federation has awarded Andy the Diversity Achievement Award as "Industry Influential".
Andy was an Operating Executive Board Member of Palladium Equity Partners, a $1 billion private equity firm. He also served as Employer Trustee for the United Food & Commercial Workers International Union Pension Fund and was an active member of New York City Mayor Michael R. Bloomberg's Transition Committee.
And y received his MBA from Thunderbird, The American Graduate School of International Management and BA from the University of Miami.