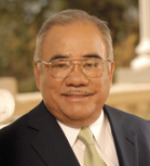 NAA Inc Chair of the Board
Founder, The Herrera Law Firm

Known for his commitment to bringing justice to the underdog, Frank Herrera’s famous line “Winning isn’t luck. It’s knowing how to fight” epitomizes the devotion that has driven him to succeed.

It was the encouragement of Frank’s parents, Frank Sr. and Elvira, that drove him to become an attorney and consequently shape his future as well as the lives of others. Born and raised in Edna, Texas, Frank’s interest in law began while observing court proceedings with his father. He found a hero in civil-rights litigator, Gus Garcia, the first Mexican-American to argue a case before the U.S. Supreme Court.

Frank was accepted at St. Mary's University on a scholarship and graduated with a Bachelor's Degree in Political Science and English in 1964. He then began his legal education at the university's law school, a rigorous program that he completed in only two-and-a-half years.

In 1969, Herrera opened his own law firm with the help of his parents, who refinanced their home to purchase Frank's office furniture and equipment.  Eventually, he formed Hardberger & Herrera, an endeavor with Phillip Hardberger, former Chief Justice of the Texas Fourth Court of Appeals and former Mayor of San Antonio.  In 1983, Frank Herrera became the sole owner of The Herrera Law Firm, a firm that truly represents all of the life experiences and hard work Herrera had been working toward since his graduation.

Frank Herrera also dedicates countless hours of his time, financial resources, and legal expertise to causes in which he believes, including the Mexican American Legal Defense and Educational Fund (MALDEF), St. Mary's University Alumni Association, and Central Catholic High School.  Mr. Herrera also is committed to the New America Alliance (NAA), which named him Chairman of the Board in 2013.  The New America Alliance is comprised of prominent American Latino entrepreneurs and business leaders who are committed to giving back to their community by increasing Latino access and control of capital and by supporting the investment in human capital to improve educational achievement and the development of future Latino/a business leaders.

Herrera is also the chairman of the board and managing partner of Valiente International Ventures, the first and only Hispanic supplier to form a joint venture with Toyota Tsusho America, Inc., an international trading company for Toyota Corporation.  The affiliate companies of Valiente are HERO Assemblers and HERO Logistics, which provide the wheel and tire assembly, as well as cross-dock and logistic operations for more than 200,000 Toyota Tundra trucks built at the Toyota Motor Manufacturing Texas plant in San Antonio.  Hero Assemblers and Hero Logistics are proudly classified as a Tier One Supplier for Toyota.  Frank runs his law firm and businesses in much the same way that he runs his life—with hopes that every move he makes will positively impact others.

Mr. Herrera is a strong advocate for economic and political empowerment for the Latino community.  In addition to helping thousands within the legal system, he has made a strong commitment to his community and regularly volunteers his time, energy, and financial resources to social causes.  Active in a wide variety of charitable endeavors, Mr. Herrera has served on a range of boards and has donated money to numerous civic, community, cultural and educational organizations, most of which aim to improve the lives of the less fortunate.

Throughout his life, Frank has worked for others and his endeavors have been recognized as he has received numerous awards and accolades:

Finally, Frank’s most proud aspect in his life is his family.  Frank has two sons, Jorge (36) and Javier (32), both of whom are litigators in his firm and actively participate in his business ventures with Toyota.  His wife, Cecilia Elizondo-Herrera, is a former foreign diplomat with the United States State Department.  They both enjoy spending their time with their grandchildren, traveling and devote their time to smaller community organizations and fundraisers in San Antonio.