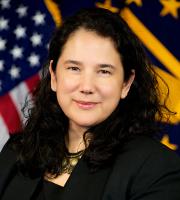 Isabella Casillas Guzman's entrepreneurial spirit was highlighted in the inaugural issue of Profiles in Leadership in 2001 as partner of Inez Fine Arts & Frames and Miauhaus Studios. In early 2002, while working as Partner/Studio Manager of Miauhaus Studios in Los Angeles, Giselle was appointed by Governor Gray Davis to serve in his administration as Deputy Appointments Secretary. This sabbatical continued through December 2002, when she returned to Los Angeles to pursue her business interests. Isabella has launched, consulted and advised businesses at all stages of development from early start-ups to mature enterprises. Her consulting work has included early development work with Fortius Holdings, and Contreras-Sweet Communications. She has also been engaged to focus on long-term growth for Illulian Enterprises and ProAmerica Bank.