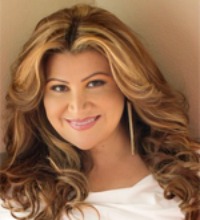 Jackeline Cacho defies all labels, forging ahead with her success as a gifted journalist, host of an inspirational nationally broadcast interview program, and role model to Latinas around the world who struggle with both inner and outer challenges. While the path of her career has taken many turns, her commitment to her roots, her integrity and her quest to spotlight other successful Latinos has never waivered.

Today, she is the host of "Jackeline Cacho Presenta Triunfo Latino,"the highest rated television programon the Spanish-language PBS network VMe TV. Seen in more than 40 cities across the country, every episode features guests who are making major strides to lift the image of Latinos and leverage their fame and expertise in helping communities all over the nation.

Her signature look and personality permeate each of her shows, shedding insight on what makes Latino luminaries successful in spite of all the challenges they confront. From political stalwarts like former San Antonio Mayor and HUD Secretary Henry Cisneros to global celebrities like Paul Rodriguez, Carla Estrada, Pedro Eustache and others, each show illuminates for viewers the hard work and dedication needed in today’s complicated world.

The show’s success in promoting positive role models has earned Cacho numerous awards and commendations. But success for her has been a long journey, since her first triumph as a beauty pageant contender in her native Peru. Outspoken and proud of her indigenous roots, she defied the caste and color barriers that often relegated women of Inca ancestry to subservient roles in the tourism and travel industry.

She parleyed her modeling prowess into a successful media career resulting in an opportunity to move to the U.S. and an entre into the world of television news.

Cacho’s career in journalism began with Telemundo’s Channel 48 in Houston, Texas, where she was the weather forecaster and moved on to special assignment reporter. As her notoriety grew in Texas, she was recruited by Univision’s affiliate in San Antonio as weekend anchor and full-time reporter. Her national fame would grow as she made special assignment reports for Univision’s “Despierta America,” “Aqui y Ahora,” and on the network news covering issues in the Middle East and Central America.

In 2007, Cacho moved to Los Angeles to anchor the network news at Azteca America, a growing Spanish-language news organization based in Mexico, City.This opportunity to anchor a national news broadcast opened many doors for Cacho, and introduced her to many luminaries of politics, entertainment and education.

In a new direction for her, Cacho will soon release her first book in Spanish, “Mi Mochila Emocional,” chronicling her courageous fight with depression and anxiety attacks. Her gut-wrenching account of the disease and how it almost derailed her fast-track career path is meant to be a beacon of support for all who suffer from debilitating depression.

From sharing stories with today’s Latino giants, to illuminating the struggles of her own life, Jackeline Cacho is a woman for the new millennium. She continues to spread her message of hope, the importance of hard work and determination and commitment to her Latino heritage in every new project she undertakes. With new chapters of life still to explore, she remains a work in progress…progress that benefits us all.