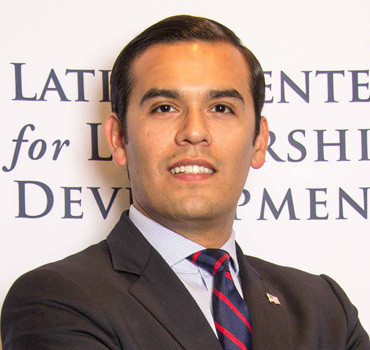 Miguel Solis serves as the President of the Latino Center for Leadership Development (LatinoCLD) where he oversees the creation of programs and services. Miguel is a native Texan, raised by his mother, a school bookkeeper, and late father, a public school teacher and small business owner. He received his B.A. in history with a minor in political science from Lamar University and received his M. Ed. in education policy and management from Harvard University.

Miguel became the youngest school board member ever elected to the Dallas ISD Board of Trustees on November 5, 2013 through special election. Soon after, he was re-elected to serve a three year term. On June 26, 2014, Miguel was selected by his fellow Trustees as the Board President, making him the youngest ever to serve in the position. Miguel has been appointed to the Citywide Poverty Task Force and Joint Committee on Education by Dallas Mayor Michael S. Rawlings. He is also an Aspen Institute Rodel Fellow having been selected as one of the nation’s most promising young political leaders.