“Action without study is fatal.  Study without action is futile”
Mary Beard
Where many investors may be concerned about their return profiles under pressure from the combined headwinds of a global economic slowdown and real inflation data, we see a wide range of potential investment opportunities.

A major consideration when analyzing the current risk environment is the expiration of the “Fed Put”, or more formally, the transition from Quantitative Easing to Quantitative Tightening.  As central banks raise rates to temper inflationary factors, there is less of a reach for yield in the capital markets since current investments may be losing value and borrowers are faced with rising costs.  So where does one take risk in an inflationary environment?  Academics, studying historical inflationary patterns for the past 100 years will observe that:

(Data courtesy of the Man Group)

So per this academic exercise, technically driven investors should warehouse their art, not drink their wine and dig deep for their stamp and baseball card collections!  We are being facetious of course, but there are vehicles which are constructed to take that type of risk.  We believe those vehicles tend to be illiquid, market timing reliant and prone to hype and price manipulation.

We also believe we have entered a significant repricing environment with both fundamental and technically-driven opportunities to create asymmetric risk-return profiles.  Here is where we see both short-term and medium-term opportunities:

The debt markets are in a discovery period as investors are repricing risk.  One of the most common (but at times misleading) measurements is the amount of debt falling in the“distressed” category.  This might be a misnomer just as “junk” is at times substituted for “high yield”.  As it stands, the current definition includes bonds with spreads wider than 1,000 bps to Treasuries, and loans trading at less than 80 cents on the dollar.  This does not confirm a company is “distressed” but could be a result of technical pressures such as lack of secondary market liquidity or a flight to quality.  As of May 24, there was approximately $146 billion in distressed debt, up from about $75 billion in mid- April (see Figure G). This is the highest level since December 2020 but still well below the highest levels in 2020 when the numbers suggested nearly $1 trillion of debt was classified as distressed.  This current repricing was well spread out across industries with: 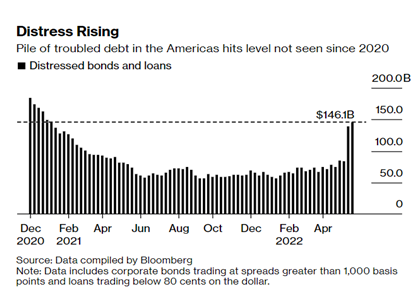 So, opportunities are growing but risks are increasing as well.  The key is to identify those companies that do not have immediate liquidity issues and are in solid secular sectors.   In addition, an often overlooked risk in the current climate is intra-creditor fighting.  Previously, creditors tended to be aligned, depending on the fulcrum security.  Covenants used to protect subordinated debt but now it is open warfare as long-only and opportunistic investors desperately search for yield. Debt belonging to companies such as J. Crew, Serta, Boardriders, Trimark, Incora, and Envision has been subject to financial engineering in an attempt to move assets into other vehicles. This would benefit new cash providers (who could also be a subset of the current lender group) who may not have given all existing senior lenders the opportunity to participate.  The tremendous growth in leveraged finance (the market doubled to $1.5 trillion from 2010 to 2020) resulted in weaker covenants which allowed for asset transfers that were out of reach of some creditors, and benefitted those able to put up more cash.  The size of these transactions, which are still not the norm, have created a greater urgency to protect investments.   The current environment will only create more documentation-related tensions among creditors, as markets continue to slide down.  The moral of the story is to make sure to include potential asset transfer and other maneuvers when valuing risk.

As interest rates rise and consumers come under inflationary pressures, there has been an increase in corporate filings.  While the percentage increase may seem significant, it should be noted that due to the decade-long low interest rate environment, there was easy access to capital.  This last quarter saw an increase in U.S. bankruptcy courts to levels not seen since September 2021.  As of late April, there were 18 significant bankruptcies, still fairly benign but indicating that the trend is moving toward filing since financing out of trouble is become less of an option.  While we could selectively participate in bankruptcy-related transactions, there are tangential, attractive opportunities such as investing in spin-offs or taking advantage of the low-multiple entry points into smaller companies.  In addition, as we anticipate a rising default rate, we can also identify those smaller, idiosyncratic credits which may be quicker to recover from a restructuring.

Our longstanding thesis that the wave of historic stimulus packages did NOT raise all ships remains intact.  We continue to see opportunities in small companies that are either in the midst of a generational transition or are non-core parts of larger businesses.   According to Cornell University, there are 5.5 million family-owned businesses in the US as of May 15, 2022. These contribute 57% of GDP and employ 63% of the country’s workforce.  Many of these businesses are in fragmented industries and are prime for a roll-up strategy.  The succession survivability of these companies is poor, with less than one third surviving the first to second generation shift and a paltry thirteen percent second to third shift.   We believe that with an orderly transition and solid management additions, there are opportunities in this sector.

SPACs.  We have been following the SPAC asset class since inception, through the boom and bust as the sector matures.  It does not look good for the market, which in turn may present opportunities.  Of the 232 companies that listed between 2020 and 2022 (the “boom”), as of May 27, 2022, at least 25 of them have filed going-concern warnings (see Figure I on page 10).  This comes when a company’s auditor concludes there is “substantial doubt” about the viability of the business. 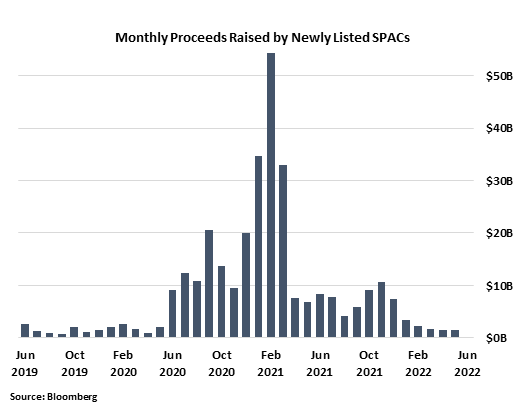 Taking risk is inherent in any investment.  The challenge is to identify opportunities in all environments and be sufficiently prepared to act when the unexpected becomes the norm.