NAA is honored to support the establishment of The Cisneros Center for New Americans and to celebrate the legacy of NAA Co-Founder Henry Cisneros.

On the launch, Founder Henry Cisneros stated, "The Cisneros Center is being established to develop a 'road map' to empowering young immigrants as they strive to fully integrate into American society. We will harness the collective expertise of our partners among key civic, academic, and corporate leaders. We will help equip the next generation of motivated young professionals to be our nation's 'boots on the ground' in communities as they work to overcome the barriers that keep immigrant communities and fails from achieving the American Dream." 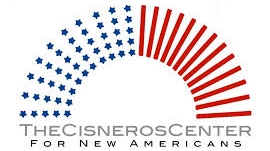 We commend former NAA Chair Jose H. Villarreal for his leadership as Chair of The Cisneros Center and we congratulate Cecilia Elizondo Herrera who serves as President & CEO.

Two strategies The Cisneros Center will be implementing are (1) Identifying and promoting immigrant integration best practices, and (2) Instilling a sense of urgency about education. The entire effort will be supported by a public awareness campaign to create a sense of urgency among immigrants, receiving communities, and the American public.

View more information on The Cisneros Center including a full list of their Board of Directors.

Join The Cisneros Center for New Americans on social media!

The Cisneros Center for New Americans, a 501(c)(3) non partisan, non-profit institution headquartered in San Antonio, Texas, which initiates and conducts nationally-based operations and programs that result in measurable social, economic, and educational advancement in the lives of Latinos and immigrants seeking to fully integrate and participate in the prose of the "American Dream."