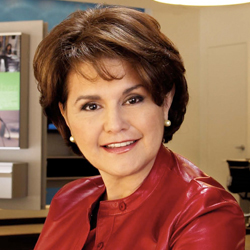 Patricia Diaz Dennis serves on the Boards of Directors for Massachusetts Mutual Life Insurance Company, U.S. Steel and Entravision Communications Corporation. She is a trustee of the NHP Foundation, a member of the Advisory Boards for LBJ Family Wealth Advisors and Western Governors University Texas, and is Chair of The Global Fund’s Sanctions Panel. She was a Senior Vice President & Assistant General Counsel overseeing various legal matters for the company originally known as SBC Communications (which became AT&T) from 1995 to 2008, when she retired. Before joining SBC, Ms. Diaz Dennis received three Presidential Appointments, confirmed by the U.S. Senate. President Ronald Reagan named her a member of the National Labor Relations Board, where she served from 1983 to 1986. He then appointed Ms. Diaz Dennis a commissioner of the Federal Communications Commission where she served until 1989. From 1989 to 1991, Ms. Diaz Dennis was a partner and head of communications law department for Jones Day, Reavis & Pogue. She returned to public service when President George H.W. Bush appointed her Assistant Secretary of State for Human Rights and Humanitarian Affairs in 1992. Long-dedicated to girl scouts, she served as a chair of the Board of Directors of Girl Scouts of the U.S.A. from 2005 to 2008. Ms. Diaz Dennis has been honored for her professional achievements as well as her ongoing commitment to volunteerism and philanthropy. Just to describe a few honors: In 2012, The Women and the Law Section of the Texas State Bar selected her to receive the Sarah T. Hughes Women Lawyers of Achievement Award. In 1999 she was named the UCLA LAtino Alumni Association Alumna of the Year and was induected into the San Antonio Women’s Hall of Fame for Law in 2002.