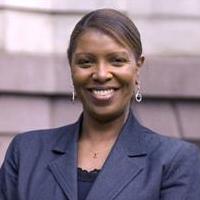 Public Advocate Letitia "Tish" James was born and raised in Brooklyn and continues to call the borough home. After graduating from Howard University School of Law, Ms. James began her career in public service, starting as a public defender in the Legal Aid Society. She later served as a top-level aide in the State Assembly and as an Assistant Attorney General for New York State (Brooklyn Region).

Ms. James was elected to the City Council in 2003 where she distinguished herself as a fearless and effective advocate for social and economic justice. As a public defender in the Legal Aid Society, Ms. James represented low-income children and families in the criminal justice system. As an Assistant Attorney General, Ms. James resolved hundreds of consumer complaints and investigated predatory lenders who prey on first-time homebuyers. She assisted the Civil Rights Bureau in its investigation of the NYPD’s stop-and-frisk policy and cracked down on firms engaged in deceptive business practices including violations of human rights, environmental laws, and scams targeting immigrants.

As a member of the New York City Council, Ms. James introduced and helped pass the Safe Housing Act, which became City law in 2007. This ground-breaking bill ensured that thousands of families in rental buildings receive prompt and full repairs to their apartments. Ms. James also helped preserve afterschool programs and childcare slots. As chair of the City Council’s Contracts Committee, Ms. James helped uncover the CityTime scandal which cost the taxpayers hundreds of millions. She also held hearings on the privatization of public service jobs and ensuring the MWBE programs were working for communities across New York. She fought to make sure mega-projects like the Atlantic Yards development included affordable housing and represented a fair shake for local communities.

Ms. James used her City Council position to take on Stop and Frisk abuses and anti-choice extremists who use “limited-service” health clinics to deny women the right to choose. In the General Election, Ms. James won the most votes of anyone running for office in New York, making her the fourth Public Advocate of New York City. Ms. James is a graduate of New York City public schools and CUNY’s Lehman College.