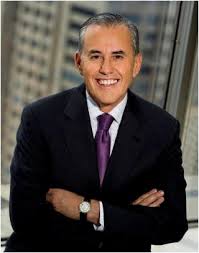 Since joining Univision, Llamas has made significant progress in improving the Company’s organization and leadership performance along with its programs to better inform, empower and advocate on behalf of the Hispanic community. Key initiatives he has championed include enhancing organization and leadership productivity, optimizing resource allocation, and improving talent development and learning systems. He has also created and effectively implemented award-winning community-based programs to empower and advocate on behalf of Hispanics with particular emphasis on educational attainment, improved health, financial prosperity, and civic engagement. Since creating and launching these new efforts, Univision has reached and engaged hundreds of thousands of Hispanics.

Prior to Univision, Llamas was at The Nielsen Company where he served as chief human resources and public affairs officer for the consumer research company with 40,000 employees in 100 countries. At Nielsen, he helped build a high performance culture and implemented robust leadership and talent development systems and also implemented human capital and community-based strategies to invest and succeed in Nielsen’s markets and communities, including developing markets.

Prior to Nielsen, Llamas served as chief administrative officer for The Cleveland Clinic, a top rated health care institution with 45,000 employees. There he implemented productivity initiatives that led to operating gains and improved patient and employee satisfaction. Llamas also introduced six sigma and wellness programs and significantly upgraded compensation, diversity, and leadership development programs. He formerly was the chief human resources officer for Lehman Brothers and was also a corporate officer at General Electric where he headed up HR and other functions for three of GE’s largest businesses. Llamas has also owned and managed his own consulting firm and held senior leadership positions at TRW and Southern California Edison.

Llamas, a graduate of California Polytechnic University, earned a master’s degree in Organizational Development from Pepperdine University. He has served on the board of trustees for several community and education based organizations. Llamas has been named one of “100 Most Influential” by Hispanic Business Magazine; recognized twice by The Image Foundation as “Most Powerful/Influential Latinos in Entertainment,” and honored by Hispanic Executive Magazine as “Top 10 Lideres.” Llamas has been profiled in several publications, including Talent Management Magazine, Poder Magazine, and Hispanic Executive.