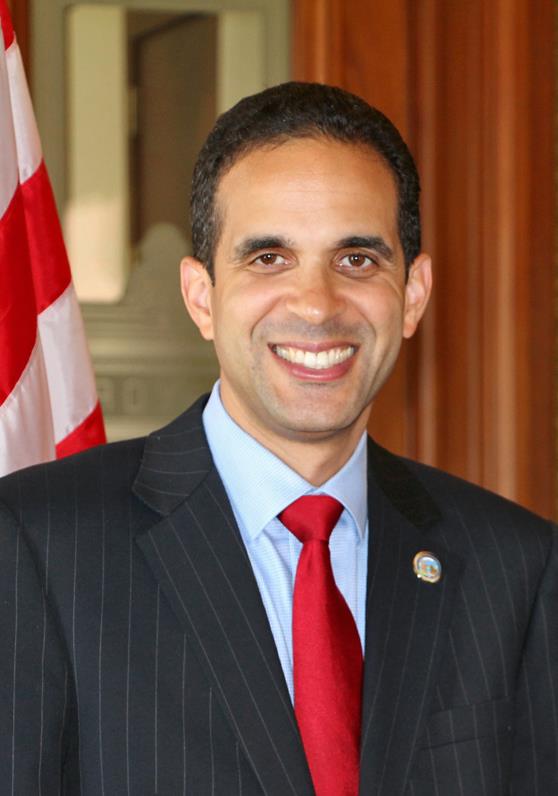 Angel Taveras, the City's 37th Mayor, grew up on the South Side of Providence and went from Head Start to Harvard via the Providence Public Schools. As a third grader at the Mary Fogarty Elementary School, Angel was encouraged by his teacher to set big goals. After graduating from Harvard, Angel attended Georgetown University Law Center to pursue his childhood dream: becoming a lawyer in order to help others. As an attorney, Angel established himself a litigator and a widely-respected elections lawyer.

In 2007, Angel was appointed to serve as an Associate Judge on the Providence Housing Court, where he helped to streamline the interaction between inspectors and the Housing Court and improve the code enforcement tracking system.

In 2010, Angel stepped down from the bench and entered the race for Mayor of the City of Providence. This opportunity to serve the people of Providence was unexpected, yet Angel was up to the challenge. On September 14th, 2010, Angel won a four-way Democratic Primary with 49% of the vote and carrying 11 of the city's 15 wards. He went on to win the General Election in November of that year with 82% of the vote.

Angel Taveras was sworn in as Mayor of Providence on January 3, 2011.

Combining progressive principles, pragmatic action and unprecedented stakeholder collaboration, Mayor Taveras has led efforts to successfully pull the City back from the brink of bankruptcy and championed a national model for inclusive, structural fiscal reforms.

Mayor Taveras has made the tough, necessary decisions to strengthen Providence's fiscal ground and put the Capital City on a path towards sustainable progress. Since taking office, Mayor Taveras, with support from the city's employees, labor unions, tax-exempt institutions, civic and political leaders, retirees, and taxpayers has eliminated a $110 million structural deficit and reformed the City's previously unsustainable pension system, thus averting near-certain bankruptcy for Providence. The Mayor's efforts to bring about comprehensive pension reform while protecting retirees' fundamental benefits during difficult economic times have been heralded by the Wall Street Journal as an inclusive model other cities, towns and counties should replicate. Mayor Taveras sees a bright future for Providence and is focused on creating economic opportunity and jobs, improving educational outcomes and public safety, and building a more livable city for all residents. Mayor Taveras has consolidated the City's economic development efforts to recruit new businesses and support existing ones. He is also encouraging creative entrepreneurship through the first-in-the-nation Innovation Investment Program (IIP) which partners with Betaspring, a mentorship-driven accelerator program for technology and design entrepreneurs, to invest in startups that complete the program and locate in Providence.

In July 2012, Providence was one of 14 communities across the United States to be named an All America City for its plan to ensure that all students are reading on grade level by third grade. Under Mayor Taveras, the Providence Public Schools have focused reform efforts aimed at improving outcomes and preparing our children for success and the Providence After School Alliance continues to win national recognition.

Mayor Taveras is working with partners such as The Institute for the Study and Practice of Nonviolence to strengthen relationships between the police and community and curb youth violence. Building on his experience as a Housing Court Judge, Mayor Taveras and the Providence City Council are implementing new measures to protect neighborhoods from the plight of abandoned and neglected properties while providing a path towards affordable homeownership in neighborhoods hit hard by the foreclosure crisis.